The power of play in the workplace

These days, starting a new job is as much about finding the right cultural fit as it is about the right work and the right pay. We spend so much of our time at work that we want to ensure that we land somewhere that not only aligns with our values – but also values its people.

Being thrown onto a project and into a team is a great way to get an initial read on this. You get to see how people work, how they treat each other, how teams operate, how visible the boss is, and hopefully even whether your colleagues have a sense of humour, know how to have fun, and even how they play.

The funny thing about the modern, creative workplace is just how increasingly important the concept of play is becoming. This shouldn’t surprise us, though, as thinkers as diverse as Jung, Einstein, Maslow and Ralph Waldo Emerson have been saying this for years. It’s not just that “It is a happy talent to know how to play” as Emerson says. But that new ideas and creativity itself are a product of the play instinct or purposeful play – hovering in there somewhere on the tightrope strung up between Paidia, the spontaneous nebula from which all play originates (kids in the backyard); and the more formal, rule-focused state of Ludus (Thursday night poker).

Over the years, in different roles, I’ve participated in everything from lawn bowls to laser tag. I’ve been to trivia nights and Melbourne Cup functions; I’ve eaten the cuisines of many nations as a member of teams of all shapes and sizes. And as fun as all of those activities were at the time, they were positively prosaic in comparison to the ebullient madness of my first encounter with the Wild Moose Chase. 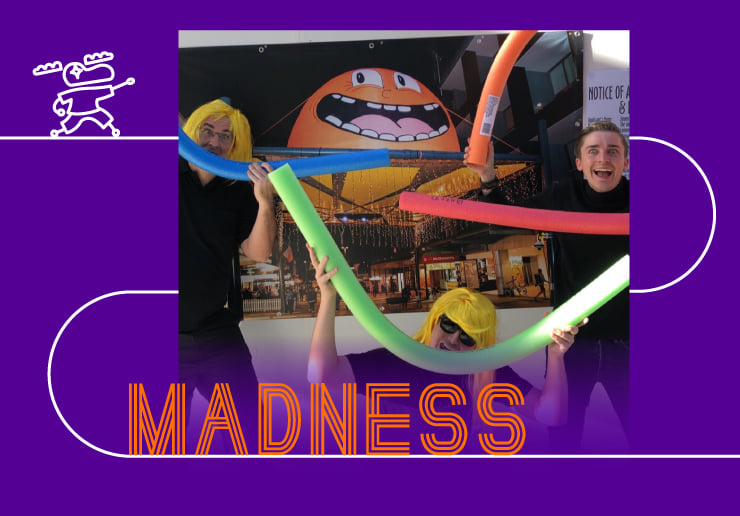 How so? Well, picture this: It’s 3 o’clock on Easter Thursday and I’m in the middle of Brunswick Street Mall in the Valley, wearing a Metalica T-shirt, black jeans and black sequined cat’s ears, and along with my four similarly attired team mates (the Twitter inspired ‘Black Metal Cats’) we’re attempting to build a human pyramid. Fortunately, after a false start, we were eventually successful. And the reward for our fearless physical feat? 600 points! 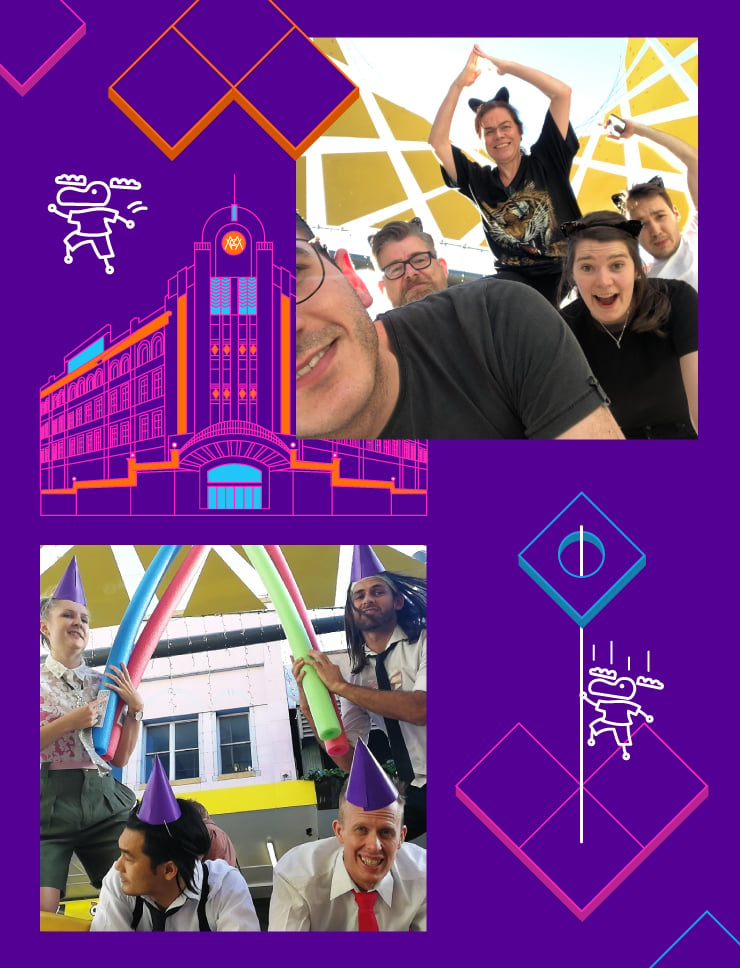 The Black Metal Cats were just one of eight equally exotically named teams participating in the 2019 edition of Liquid Interactive’s Wild Moose Chase - an app-based, frantic free-for-all that mashes-up the best bits of ‘The Amazing Race’, ‘Shark Tank’, and ‘Whose Line is it Anyway?’ and invites you to smash through as many of the 60 challenges as you can in two hours. The app details all of the missions and is used to record video and photographic proof for submission and assessment by the judges. A leaderboard provides real-time updates as to your position in the pack, as well as notification of bonus points awarded to your team by the judges along with a bunch of other in-game announcements. 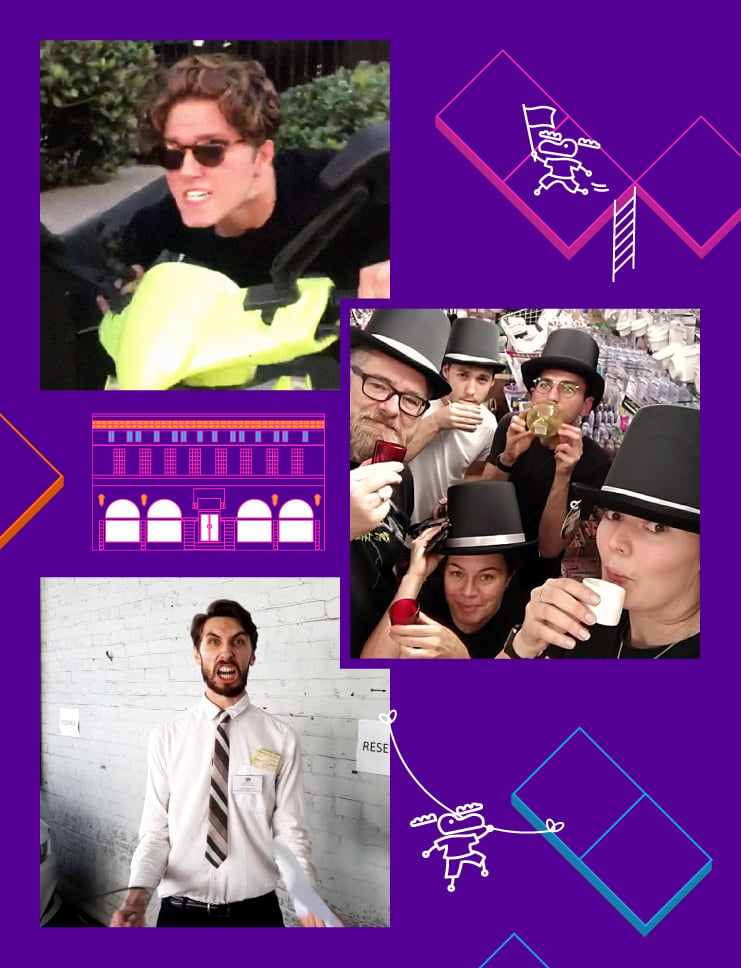 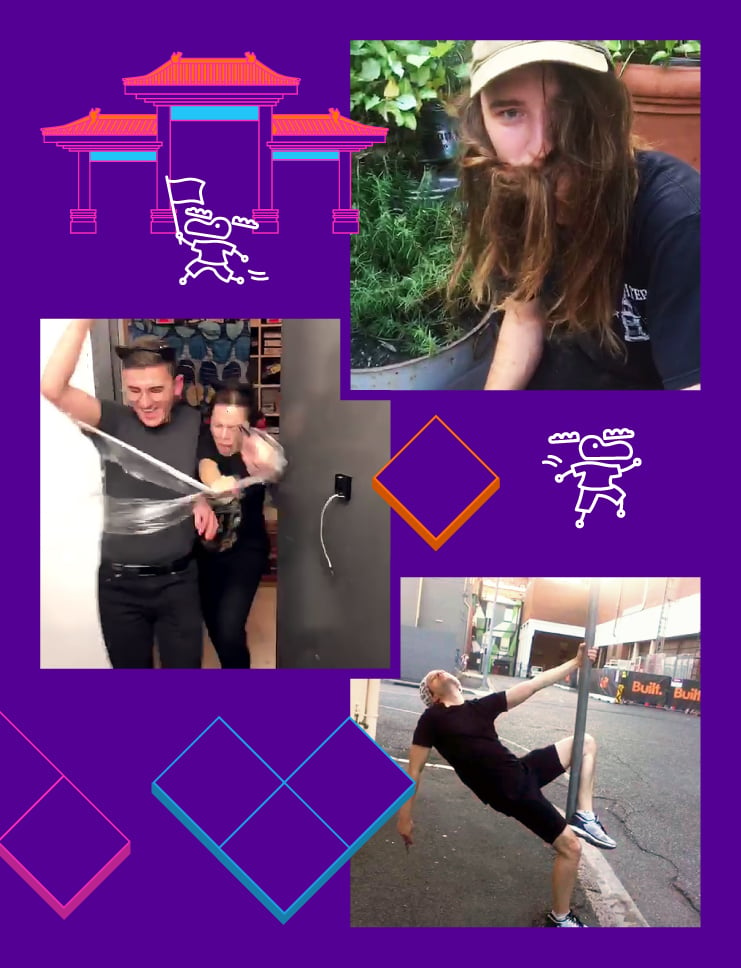 As the competition wore on and the easier (read: less embarrassing) challenges were accomplished and submitted, all teams found themselves in the position of needing to take on the more difficult (read: more embarrassing) challenges in order to continue to accumulate points and stay in touch with the teams ahead of them on the leaderboard. This required some quick fire, creative, often lateral thinking amongst team-mates along with a willingness for one, two or even all five team members to put themselves ‘out there’. The reward for doing so was immediate - nothing like the extrinsic motivation of the app leaderboard when you see your team leapfrog another team having just smeared your faces with a McDonald’s Soft Serve ice cream. And nothing better demonstrated how well the Wild Moose Chase managed to consistently hit the sweet spot between the spontaneous ice cream inspired Paidia and the subsequent points gained under the rule-focused Ludus. 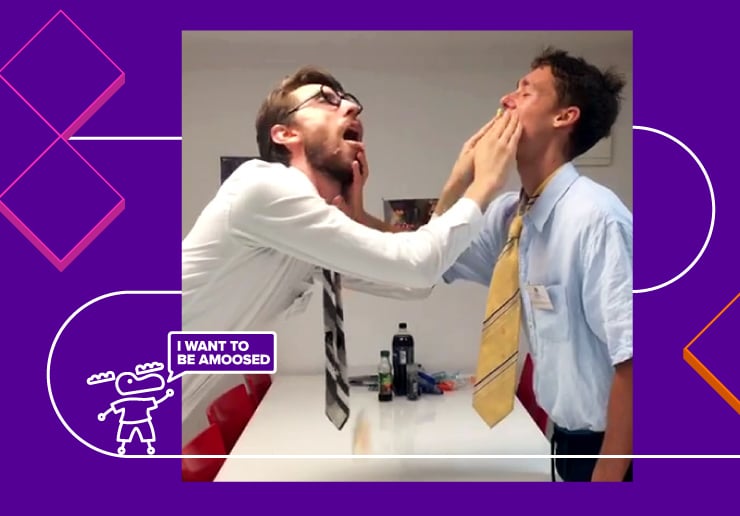 Amazingly, the Black Metal Cats managed to successfully get through 46 of the 60 challenges in the two hours (one every 2.6 minutes), yet even with the bonus points we picked up on several of the challenges, our total of 28,600 was only good enough for fourth. We finished 1,300 points behind Blakey’s Angels in 3rd and a whopping 8,000 points behind the Uniform Unicorns who managed to rack up their 38,600 points by actually successfully completing all 60 challenges.

While the small-ball strategy of the Uniform Unicorns, which prioritised the quantity of entries over quality, saw them convincing winners over the Headless Harry’s (34,600) - it did lead to lots of ribbing and public admonishment from the other teams (and the judges) as submissions were reviewed over cold carbonated beverages post the heat of battle. Though it should be pointed out that the Uniform Unicorns’ efforts weren’t the only ones subjected to such a rowdy, public form of peer review. Most of the other teams enjoyed similar, good-natured derision for their borderline efforts too. 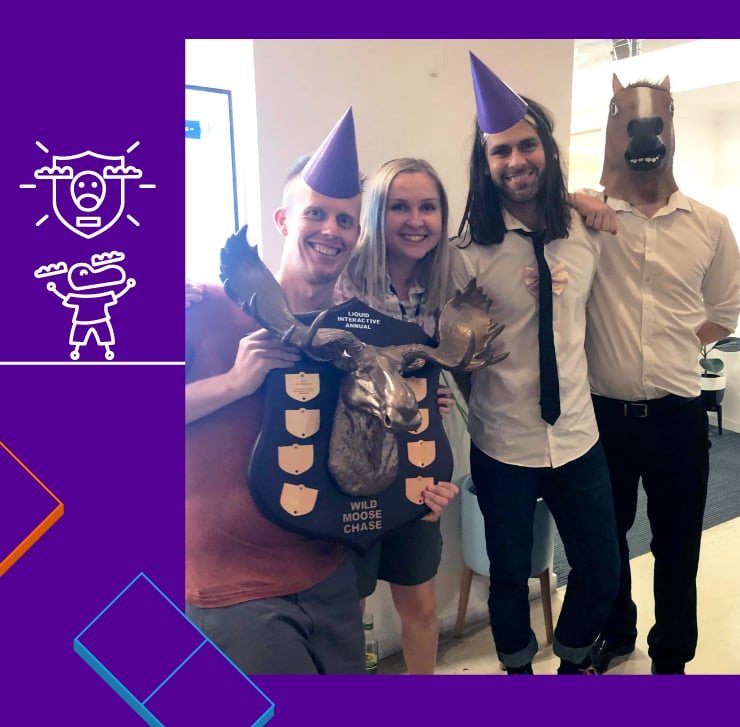 As much fun as the actual Wild Moose Chase was, the post-Moose Chase review was even more fun. Not only did you get to enjoy all of the inspired ‘creativity-in-the-moment’ submissions from all of the teams; you also got to laugh along with the other teams at a bunch of brilliantly ridiculous ideas generated by a collective of creative people armed with nothing more than a mobile phone, a license to play and an enviable esprit-de-corps.

For me, that is the real beauty of the Wild Moose Chase. It is much more than a fun way to spend a mad couple of hours. It’s about throwing colleagues from different disciplines together and encouraging them to play. It’s about demonstrating the value in the power of the idea over the place of the individual in the hierarchy. It’s about reinforcing the importance of psychological safety in maintaining a culture that encourages innovation, and instilling a sense of confidence that the team will not embarrass, reject or punish someone for speaking up. It’s a way of reinforcing a team culture characterised by interpersonal trust and mutual respect in which people are comfortable being themselves, and it’s also the sort of thing that Google learned from its quest to ‘build the perfect team’ but, in Liquid’s case, for a lot less money and in a lot less time.

And after my first experience with the Wild Moose Chase, the words of Richard Lingard (1598-1670) in his ‘A letter of advice to a young gentleman leaving the university concerning his behaviour and conversation in the world’ never rang more true: “You can discover more about a person in an hour of play than in a year of conversation.” 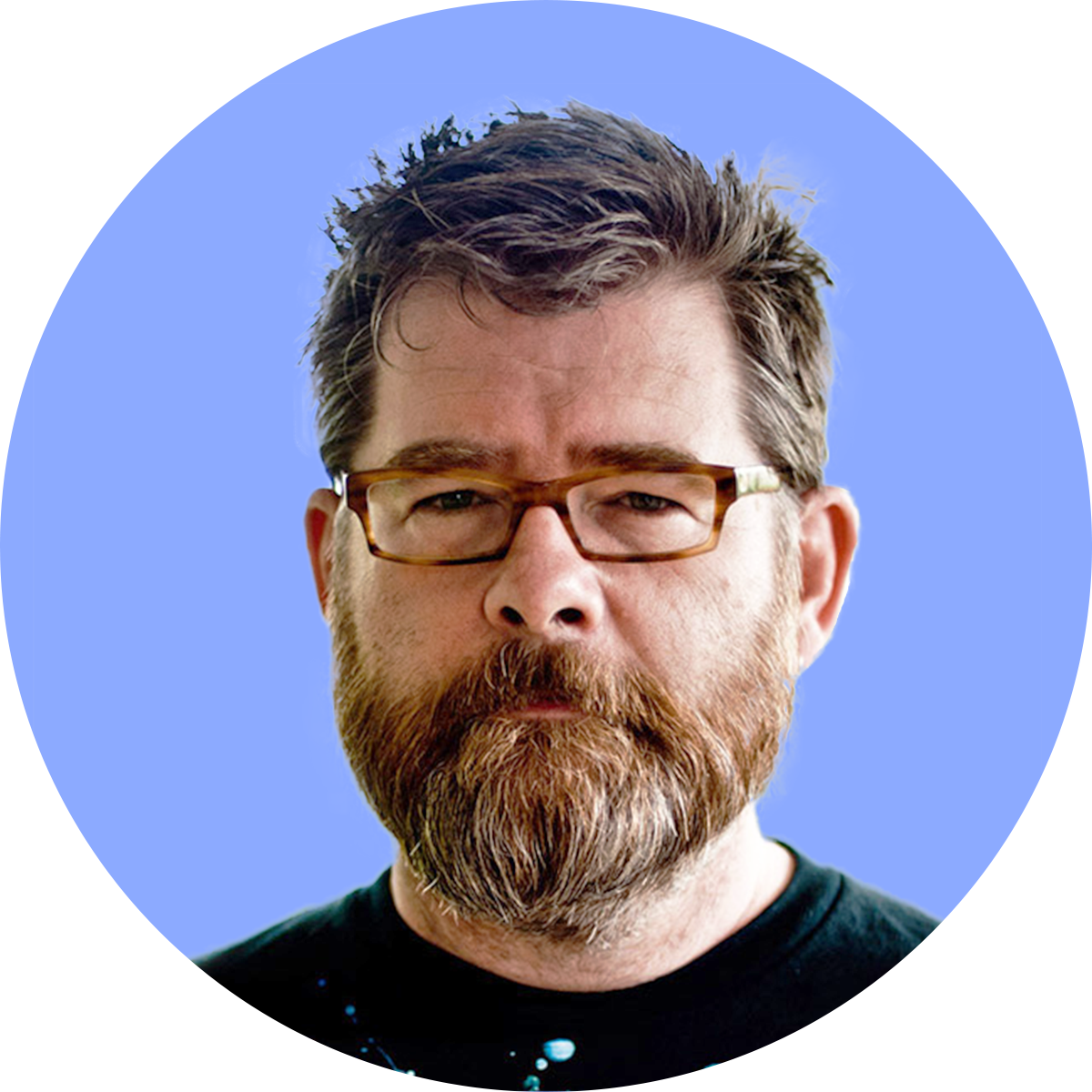